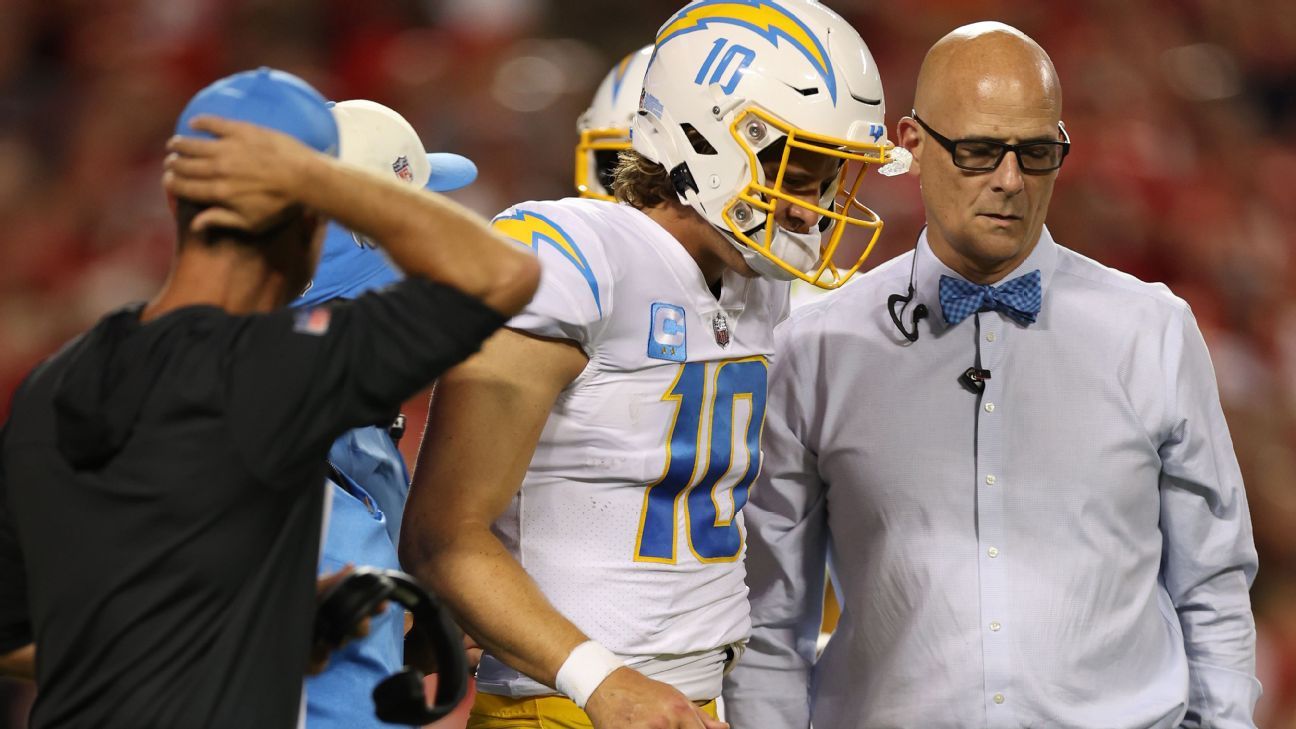 “He’s gotten a lot of rest since the last game,” Staley said. “He’s feeling more comfortable. I know that he was able to do some light throwing yesterday, some rotational work, but we’re just going to take it day by day and see where his comfort level is.”

Herbert did not throw any passes during the brief portion of practice open to reporters Wednesday. The third-year quarterback watched as backup quarterbacks Chase Daniel and Easton Stick took throwing reps.

Herbert did partake in handing balls off to running backs and was listed as a limited participant on the Chargers’ injury report.

Receiver Keenan Allen and tight end Donald Parham Jr., both of whom have been dealing with hamstring injuries, also returned to practice in a limited capacity.

Staley said whether Herbert plays Sunday will be a decision that begins with the quarterback.

“It will start with him and then obviously him feeling good about what the medical team feels like is best, him weighing the options and then us making a good decision,” Staley said.

The Chargers doctor who is caring for Herbert’s injury is being sued for medical malpractice by former Chargers quarterback Tyrod Taylor, who is seeking at least $5 million after suffering a punctured lung while being treated for a rib injury in 2020, according to copies of the original lawsuit and subsequent filings related to the case obtained by ESPN.

When asked Wednesday if there was any trepidation about Herbert’s treatment given the recent history of quarterback care, Staley said the care of players is of utmost importance.

“Any player that goes through something like this, that’s your biggest responsibility as a coach is to take care of your players,” Staley said. “So I think we have full alignment with Justin and his family, his agents, and then the medical professionals, and that’s what we’re going to try to do is have alignment that way and just kind of trust the process and hopefully get him soon.”

Herbert suffered the injury in last Thursday’s 27-24 loss to the Kansas City Chiefs.

With 5 minutes, 9 seconds remaining in the game, Chiefs defensive end Mike Danna hit Herbert, leaving the quarterback lying on the field for an extended period.

Herbert returned after missing only one play and was immediately hit again, as he was crushed between Chiefs pass-rushers Frank Clark and George Karlaftis. Herbert, however, remained in the game.

In two games, Herbert has passed for 613 yards and six touchdowns, with an interception.